You are here: Home / Bishop Rock

Bishop Rock is the most south-westerly of Trinity House’s rock towers, situated 4 miles to the west of the Isles of Scilly. It is the tallest Trinity House rock tower at 49 m and is of unusual construction, comprising the original small tower which was encased within a larger structure; the earlier 35 m tall structure had suffered from extensive damage. The final tower was built in 1887. Modal testing was undertaken by the STORMLAMP team on 26 September 2016 who had an unexpected overnight stay when weather conditions prevented them from being collected by helicopter. Emergency plans meant that the team had sufficient supplies for the night, though fresh Italian coffee was not available in the morning causing some distress! 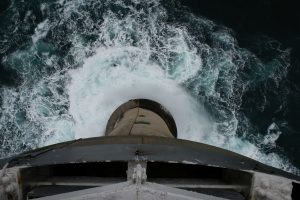