You are here: Home / Archives for James Bassitt

An online webinar was held last month on Wednesday 13th May 2020, 13:30 – 16:00 (BST), to mark the end of our four year EPSRC-funded STORMLAMP research project. The event involved presentations on lighthouse research and other relevant areas from academics, heritage professionals and industry stakeholders. There were also discussions on future directions for related research. The presentations can be viewed on the UCL EPICentre youtube channel here:

Although the face-to-face aspects of a workshop were missed, especially the ability to have more collaborative, interactive discussions with the audience, it was great to have input from those who might not have been able to attend due to distance. The project hopes to have further discussions about the future of this research.

The programme included a range of engaging speakers as follows:

The workshop began with an introduction to the STORMLAMP project by Professor Alison Raby, STORMLAMP Project PI, based at the University of Plymouth.

Tom Nancollas (Building conservationist and author of Seashaken Houses: A Lighthouse History from Eddystone to Fastnet), spoke on his experiences of research, writing and publishing his book Seashaken Houses.

Rob Dorey joined us from Trinity House, a charity dedicated to safeguarding shipping and seafarers, providing education, support and welfare to the seafaring community. He spoke on why STORMLAMP’s research is important to the UK and Irish General Lighthouse Authorities.

Professor Dina D’Ayala who leads University College London’s side of the STORMLAMP project presented ‘Crests and Troughs: the survival of Victorian lighthouses to extreme wave impact’. The talk provided an overview of the interdisciplinary approach of the project: the fundamental relevance of the historic information to develop a realistic  structural model, the need for extensive experimental and modelling work to determine the magnitude of the waves, and the role of in situ dynamic identification to validate the structural models. Through the study it is clear that it is the particular dry masonry construction and the dissipation that comes with it, that has ensured the survival of the 19th century lighthouses.

William Allsop presented on ‘Predicting safety of (old) vertical walls – the development of understanding and prediction methods’. William is an industry specialist and founder of William Allsop Consulting, formerly Technical Director for Maritime Structures at HR Wallingford, and currently a PhD candidate at University of Edinburgh writing a thesis on old British breakwaters.

Michel Cousquer joined us from Cerema, the technical partner for the French Aids to Navigation authorities. He is currently the Maritime Safety Project Manager and has also been the vice-chairman of the IALA ENG committee (Aids to Navigation Engineering and Sustainability) since 2018. Michel Cousquer presented his talk, ‘Scientific community to rescue La Jument and l’Ile Vierge lighhouses’.

Key areas for the discussion were possible future research avenues, considering an interdisciplinary approach to other heritage structures on the coast.

The workshop, held on Wed 13 May is a virtual event to mark the end of the STORMLAMP research project. The event will involve presentations on lighthouse research and relevant areas from academics, heritage professionals and industry stakeholders. There will also be discussions on future directions for related research.

THE EVENT IS FREE, REGISTRATION REQUIRED

The webinar will be held via Zoom and broadcast on YouTube.

Details will be sent out to everyone who has signed up via Eventbrite the day before the meeting. Registration here.

If you have any problems registering or accessing the event please email eve.allen@ucl.ac.uk

Tom Nancollas (Building conservationist and author of Seashaken Houses: A Lighthouse History from Eddystone to Fastnet)

> Tom will speak on his experiences of research, writing and publishing his book Seashaken Houses

> Rob Dorey will speak on why STORMLAMP’s research is important to the UK and Irish General Lighthouse Authorities.

> Crests and Throughs: the survival of Victorian lighthouses to extreme wave impact

The talk will provide an overview of the evolution of lighthouse design from earlier examples in the 17th and 18th century to the iconic and enduring solution reached in the 19th century, which has become the standard of construction for rock mounted lighthouses affected by extreme wave loading.

For waves hitting offshore wind turbine columns, a simple description is given for the main load distributed up the height of the immersed structure. For breaking waves, an extra ‘slam’ occurs high up. Both are discussed.

-Avenues for future research and commencing an interdisciplinary proposal?

-Implications for other heritage structures on the coast?

-What socio-economic aspects didn’t we address in STORMLAMP?

Tom Nancollas, Building conservationist and author of Seashaken Houses: A Lighthouse History from Eddystone to Fastnet.

Born in Gloucester in 1988, Tom Nancollas is a writer and building conservationist based in London. After university, he joined English Heritage to work on church repair grants before moving on to the City of London and its historic townscape. Of Cornish ancestry, Tom maintained a love of seascapes during his work in the capital and became fascinated with offshore rock lighthouses, finding in them a new way of looking at buildings, heritage and, unexpectedly, family.

William Allsop founded William Allsop Consulting in 2017 having worked at HR Wallingford for 48 years as Technical Director for Maritime Structures. He has served on ICE Maritime Board, PIANC working groups, and contributed to PIANC, BSI, ISO and ICE working groups, the Rock Manual, Revetment and Exposed Jetties Manuals, and revisions to the BS6349. In 2014, he was appointed an Honorary Professor at University College London, previously Visiting Professor at Southampton, Sheffield, Belfast, and UTM. He is currently a PhD student at University of Edinburgh writing my thesis on: OLD BRITISH BREAKWATERS – HOW HAS HISTORY INFLUENCED THEIR SURVIVAL? – sections of which are appearing in ICE Forensic Engineering, Maritime Engineering, and Engineering History.

Michel Cousquer has been working for 15 years at Cerema which is the technical partner for the French Aids to Navigation authorities. He currently is the Maritime Safety Project Manager and he also has been the vice-chairman of the IALA ENG committee since 2018.

Alison Raby is Professor of Environmental Fluid Mechanics at the School of Engineering, Computing and Mathematics (Faculty of Science and Engineering) at University of Plymouth, and STORMLAMP’s PI.

Research by the STORMLAMP team has received an Honourable Mention for the Peter A. Cundall Award presented at the 5th International Itasca Symposium (Vienna, 2020).

The STORMLAMP project has appointed a new Communications Officer for the final leg of the research project.

Eve Allen has been appointed to support the communications side of STORMLAMP and will be based at University College London. She will be organising a workshop: ‘Monitoring and Modelling: Maritime Structures under Environmental Loading’, to mark the end of the project. Eve will also support the core research team in publicising project research, writing and editing blog posts and developing social media.

Eve has a background in fine art and design history, with an interest in material culture, industrial heritage and maritime history. Before joining UCL she studied History of Design MA at Royal College of Art and V&A Museum. This included spending four months in New York researching the nineteenth century transatlantic maritime trade, with a focus on the oyster industry. Her research was funded by V&A Museum, Bard Graduate Centre and the Association for Industrial Archaeology.

Eve has also worked in communications for UCL Department of Economics and UCL Culture. Away from STORMLAMP, Eve can be found at the cinema or visiting the coast.

Last month a STORMLAMP team (James Brownjohn and Vincent Ao from University of Exeter and Alessandro Antonini and Trevor Bevan from University of Plymouth) carried out the tests on the 49m tall, 12 storey Eddystone lighthouse. This was the final test in an experimental campaign that has also included lighthouses off the coasts of Guernsey, Cornwall, Ireland and Scotland.

Having flown to the lighthouse by helicopter from Castle Air in Liskeard, the team set up carried out tests on the helideck platform, using four horizontal accelerometers to characterise the in-plane rigid body behaviour, while heel-drops were used to check the out-of-plane natural frequency, showing the helideck behaves like a high frequency floor. The extensive information about the helideck should permit detailed study by finite element analysis. 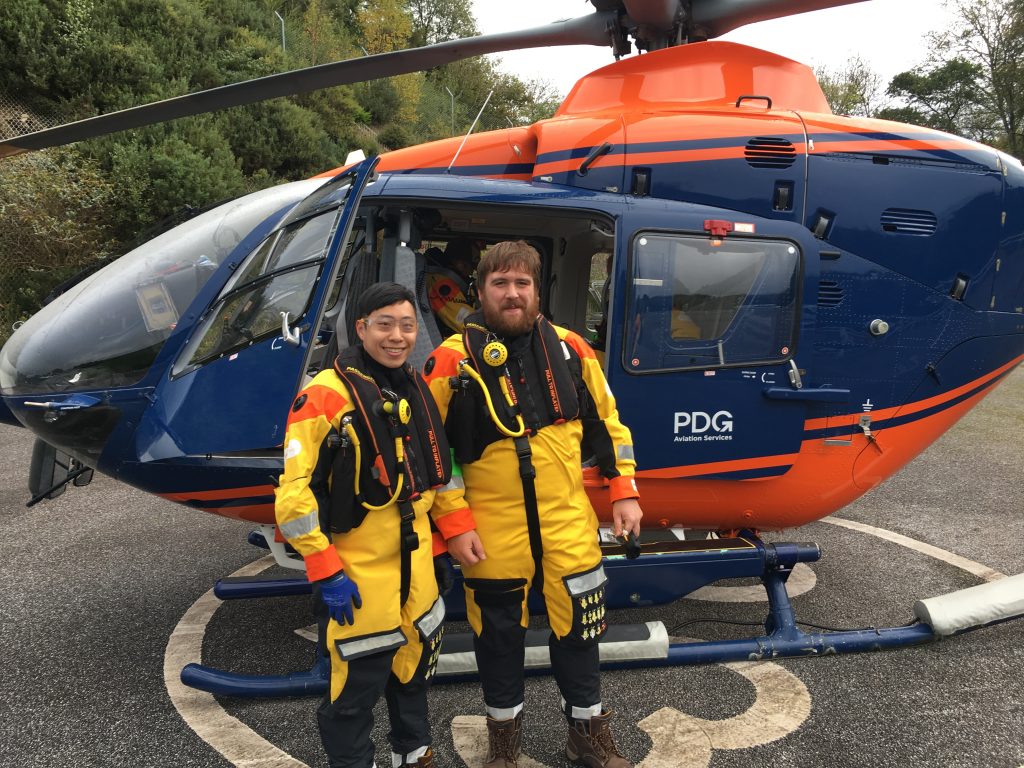 In addition, they took measurements, including single measurement of the whole structure overnight. High quality modal identification was obtained using a combination of shaker and ambient testing to characterise both the granite structure and the helideck.